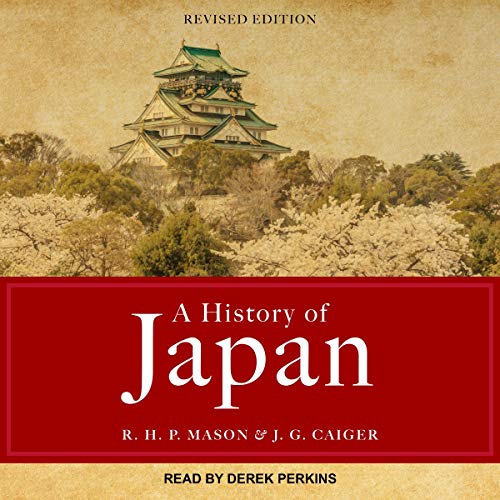 A History of Japan

A classic of Japanese history, this audiobook is the preeminent work on the history of Japan. Newly revised and updated, A History of Japan is a single-volume complete history of the nation of Japan. Starting in ancient Japan during its early pre-history period, A History of Japan covers every important aspect of history and culture through feudal Japan to the post-Cold War period and collapse of the bubble economy in the early 1990s. Recent findings shed additional light on the origins of Japanese civilization and the birth of Japanese culture.    Also included is an in-depth analysis of the Japanese religion, Japanese arts, Japanese culture, and the Japanese people from the sixth century BC to the present. This contemporary classic, now updated and revised, continues to be an essential work in Japanese studies.   A History of Japan, Revised Edition includes:   Archaic Japan - including Yamato, the creation of a unified state, the Nana Period, and the Heian period.   Medieval Japan - including rule by the military houses, the failure of Ashikaga rule, Buddhism, and the Kamakura and Muroachi periods.   Early modern Japan - including Japanese feudalism, administration under the Tokugawa, and society and culture in early modern Japan.   Modern Japan - including the Meiji era and policies for modernization, from consensus to crisis (1912-1937), and solutions through force.   This contemporary classic continues to be a central work in Japanese studies and is a vital addition to the collection of any student or enthusiast of Japanese history, Japanese culture, or the Japanese language.