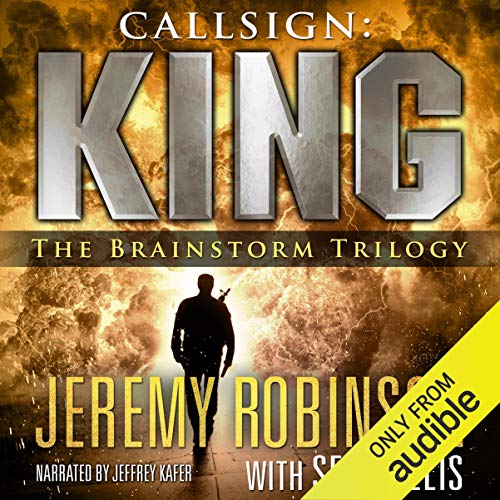 Callsign: King - The Brainstorm Trilogy is a complete collection of three novellas featuring Jack Sigler, aka, King, the lead hero in Jeremy Robinson's Chess Team. CALLSIGN: KING - Book 1 The fabled Elephant Graveyard has been discovered. It contains enough ivory to make Ethiopia a wealthy nation. But the cave contains more than physical riches - it also holds the means to control the world. Fifteen scientists enter the cave. Only one leaves. Jack Sigler, Callsign: King (field leader of the covert, black ops Chess Team) receives a cryptic text from Sara Fogg, his girlfriend and CDC "disease detective". A catastrophic disease has been reported in Ethiopias Great Rift Valley, but Fogg suspects something more is going on. Her suspicion is confirmed when King's arrival in Africa is met by a high speed assassination attempt. As King fights against two competing, high-tech mercenary forces, each struggling for control of the deadly discovery, Fogg disappears. Working with the surviving member of the science team that made the discovery, King begins a search for Fogg and the source of the potential plague that takes him back to the Great Rift Valley, back to the Elephant Graveyard, and brings him face-to-face with modern man's origins. CALLSIGN: KING - Book 2 - UNDERWORLD Strange things have always happened in the Superstition Mountains of Arizona... Bizarre lights, reports of cave entrances that appear and then vanish, hundreds of mysterious disappearances... and rumors of monstrous creatures that inhabit a labyrinthine underworld. When a terrifying accident on an Arizona highway leads to a military exclusion zone and a cover-up of staggering proportions, Jack Sigler - Callsign: King, field leader of the elite and ultra-secret covert Chess Team - joined by his closest friend, archaeologist George Pierce, sets out into the desert, intent on discovering the truth. Assisted by a beautiful paranormal investigator, dogged by soldiers intent on preserving the quarantine, and pursued by a relentless legendary hitman, King soon finds himself in a race against time to prevent all out war with the creatures that inhabit the underworld. CALLSIGN: KING - Book 3 - BLACKOUT Twice before, Jack Sigler - Callsign: King - has stopped the mysterious 'Brainstorm' from destroying all life on earth. Twice before, he's survived Brainstorm's assassins. So when the mastermind behind Brainstorm surfaces in Paris, King goes on the offensive. As the final showdown unfolds in the legendary City of Lights, the villain's scheme to plunge the world into literal darkness is revealed. But even Brainstorm isn't ready for the destructive force that has been unleashedan entity of darkness imprisoned for more than a thousand years, set free now to devour... everything. The blackout has begun... When the sun rises, the world will end.