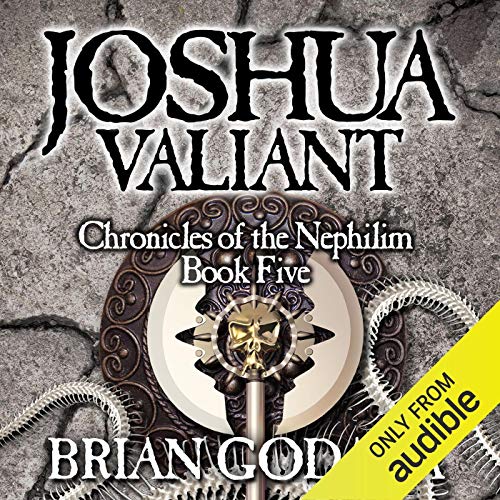 It Takes Men of Giant Faith to Face the Giants of Canaan.  After 400 years of slavery in Egypt, the Israelites are prepared to enter the land of Canaan.    Theres only one problem: Its crawling with giants.    Theyre the Seed of the Serpent with many clans: Anakim, Rephaim, Zuzim, and others.    Two Israelites, Joshua and Caleb, have the faith to lead Israel against these monsters.    Their first target: King Og of Bashan, the last of the mighty Rephaim giants.    But the goddess he worships has plans to annihilate Israel with an evil occultic army.    The War of the Seed is climaxing in this first of two companion novels, including Caleb Vigilant. Joshua Valiant is the fifth book of the series Chronicles of the Nephilim, a biblical epic story of the fallen angelic Watchers and their offspring, the Nephilim giants of Genesis 6.    Written by respected Christian and best-selling Biblical author, Brian Godawa.     Learn about the historical and biblical research behind the novel Author Brian Godawa shares an appendix that provides an explanation of Biblical concepts in the novel such as satrys and centaurs, winged fiery serpents, Og of Bashan, the giant Anakim sons of Anak, and other Biblical mysteries.    On the age appropriateness of the novels This Biblical Fiction series is rated PG-13, appropriate for mature teens and above, similar to the Bible and The Lord of the Rings.