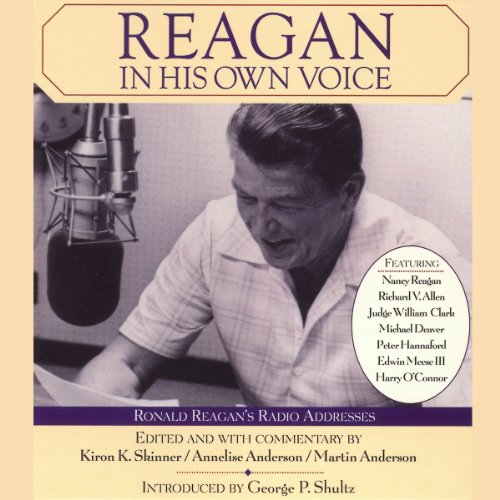 Reagan in His Own Voice

From 1975 to 1979 Ronald Reagan gave more than 1,000 daily radio broadcasts, the great majority of which he wrote himself. This program represents the opening of a major archive of pre-presidential material from the Reagan Library and the Hoover Institution Archives. These addresses transform our image of Ronald Reagan, and enhance and revise our understanding of the late 1970s - a time when Reagan held no political office, but was nonetheless mapping out a strategy to transform the economy, end the Cold War, and create a vision of America that would propel him to the presidency. These radio programs demonstrate that Reagan had carefully considered nearly every issue he would face as president. Reagan's radio broadcasts would change his reputation even among his closest friends and allies. Here, in his own voice, Reagan the thinker is finally fully revealed. Reagan's radio addresses are introduced by George Schultz and feature additional introductions by Nancy Reagan, Richard V. Allen, Judge William Clark, Michael Deaver, Peter Hannaford, Edwin Meese III and Harry O'Connor.