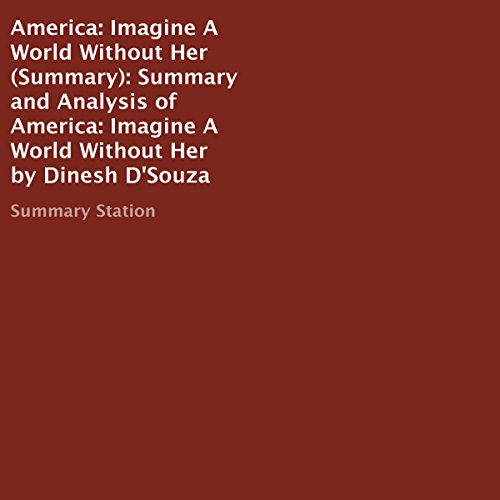 Summary and Analysis of America: Imagine a World Without Her by Dinesh D'Souza

Learn about the opinions of Dinesh D'Souza regarding the legacy and future of America in a fraction of the time it takes to listen to the actual book! In chapter one, Dinesh D'Souza outlines the basic contention of his book which is that America is committing suicide, not by inadvertence or neglect, but by deliberate policy. The villains who have conspired to make national suicide a policy are progressives of whom Barack Obama is the most powerful spokesman and executive. The progressives, who, according to D'Souza, are engineering America's destruction, believe that doing so is the pathway to a better world. The basic progressive argument for that is that America's power and wealth have been built on slavery and theft. The argument asserts that the early settlers stole the land from Native Americans and later from France and Mexico. They enslaved Africans to work it. American capitalism is institutionalized theft because it deprives the workers of a fair share of the profits. America's foreign policy is based on theft of resources. (It is in the Middle East to steal the oil.) Justice and a better world all around demand guilt and atonement: restoration and reparations for that theft and a complete change in behavior. Extreme progressives hope for America to cease to exist. More moderate progressives, of whom Obama is one, envision America's reconstruction in a better form. Here is a preview of what you'll learn when you download your copy today: General overview and summary of America: Imagine a World without Her How America is considered the land of freedom by different groups The reason why America is believed to be losing ground to China Learn how to build a better America by understanding popular opinions