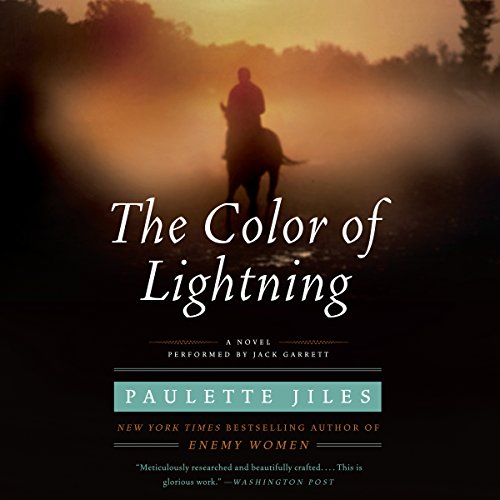 The Color of Lightning

In 1863, the War Between the States creeps slowly yet inevitably toward its bloody conclusion - and eastern thoughts are already turning to different wars and enemies. Searching for a life and future, former Kentucky slave Britt Johnson is venturing west into unknown territory with his wife, Mary, and their three children - wary but undeterred by sobering tales of atrocities inflicted upon those who trespass against the Comanche and the Kiowa. Settling on the Texas plains, the Johnson family hopes to build on the dreams that carried them from the Confederate South to this new land of possibility - dreams that are abruptly shattered by a brutal Indian raid upon the settlement while Britt is away establishing a business. Returning to face the unthinkable - his friends and neighbors slain or captured, his eldest son dead, his beloved Mary severely damaged and enslaved, and his remaining children absorbed into an alien society that will never relinquish its hold on them - the heartsick freedman vows not to rest until his family is whole again. Samuel Hammond follows a different road west. A Quaker whose fortune is destroyed by a capricious act of an inscrutable God, he has resigned himself to the role the Deity has chosen for him. As a new agent for the Office of Indian Affairs, it is Hammond's goal to ferret out corruption and win justice for the noble natives now in his charge. But the proud, stubborn people refuse to cease their raids, free their prisoners, and accept the farming implements and lifestyle the white man would foist upon them, adding fuel to smoldering tensions that threaten to turn a man of peace, faith, and reason onto a course of terrible retribution. A soaring work of the imagination based on oral histories of the post - Civil War years in North Texas, Paulette Jiles's The Color of Lightning is at once an intimate look into the hearts and hopes of tragically flawed human beings and a courageous reexamination of a dark American ...