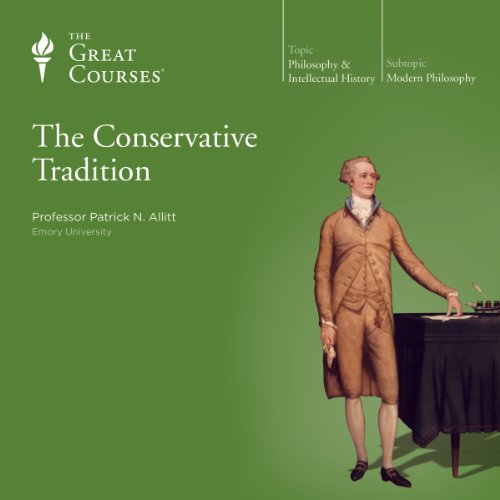 A thorough understanding of Conservatism's lineage, principles, and impact on history is essential to making sense of the 21st-century political dialogue-a dialogue that consumes the television you watch, the newspapers you read, and the radio you listen to. No matter where you place yourself on the ideological spectrum, these 36 lectures will intrigue you, engage you, and maybe even provoke you to think about this political philosophy in an entirely new way. In crafting his exploration of just why this has happened, Professor Allitt has specifically designed his lectures to be objective, neutral, and intellectually satisfying for every viewer and listener - whatever their ideological outlook. Using an easygoing and engaging style, these lectures show you how Anglo-American Conservatism developed and evolved in both Great Britain and the United States; how traditional Conservatism produced evolutionary variants like Neoconservatism and Libertarianism; and the provocative ways in which Conservatism has interacted with differing political philosophies. Following the fascinating history of Conservatism, you'll also meet the widest possible range of thinkers and practitioners behind the Conservative tradition, including John Stuart Mill, Ayn Rand, Francis Schaeffer, Adam Smith, Henry Adams, Alexander Hamilton, William Pitt the Younger, Winston Churchill, Margaret Thatcher, Ronald Reagan, H.L. Mencken, William F. Buckley Jr., Ludwig von Mises, and Friedrich von Hayek.Whether you consider yourself a Liberal or a Conservative-or something in between-these lectures can make you a more effective and informed citizen, armed with a sharpened understanding of the ways in which this philosophy has influenced events around the world. PLEASE NOTE: When you purchase this title, the accompanying reference material will be available in your Library section along with the audio.