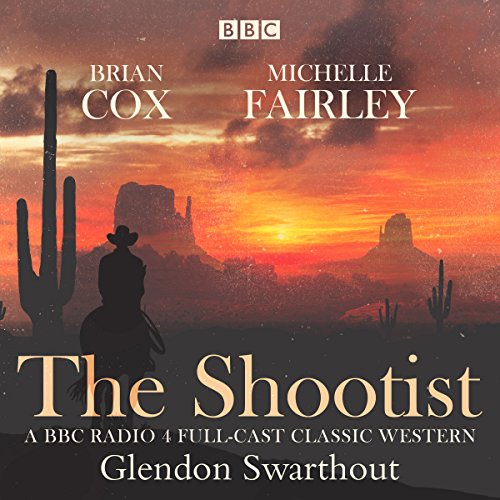 A BBC Radio full-cast dramatisation of this landmark Western, starring Brian Cox and Michelle Fairley. The Shootist is John Bernard Books, the last surviving top gunfighter in a vanishing American West. He rides into El Paso in the year 1901, to be told by a doctor that he has a terminal illness. As word spreads that the famous assassin has reached the end, an assortment of vultures gather to feast upon his corpse. Most men would end their days quietly, but Books outwits them all by selecting the where, the when and the manner of his death. The Shootist is a classic Western novel written by Glendon Swarthout in 1975. It won the Spur Award for Best Western Novel of 1975 and was chosen in the Western Writers of Americas members poll in 2000 as one of the 10 greatest Western novels of the 20th century. It was made into a 1976 film starring John Wayne and Lauren Bacall, which was John Waynes final film role. Brian Cox (X-Men 2, The Bourne Identity, The Bourne Supremacy) stars as John Bernard Books, with Michelle Fairley (Game of Thrones, 24: Live Another Day) as the widow Bond Rogers, with whom he finds affection in his final days. Cast: John Bernard Books...Brian Cox Bond Rogers...Michelle Fairley Gillom Rodgers...Joe Jameson Marshal Thibido...Craige Els Charles Hostetler...Michael Bertenshaw Shoup...Joe Sims Norton...Ashley Kumar Mrs Woodling...Heather Craney Bartender...Clive Hayward Adapted by Nick Perry Directed by Sasha Yevtushenko