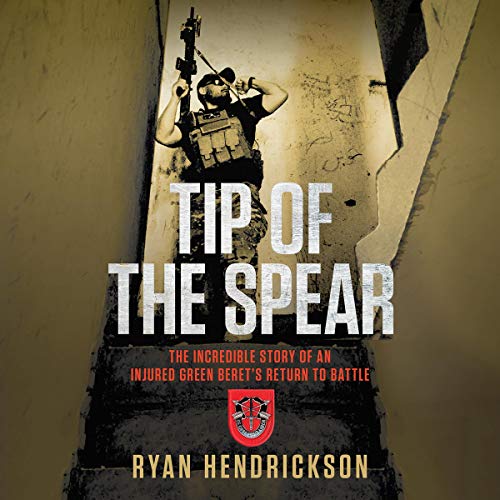 Tip of the Spear

The inspiring true story of a US Special Forces soldier who was medically retired after stepping on an IED, and his incredible return to active duty. Sergeant First Class (SFC) Ryan Hendrickson is a brave, determined, and courageous soldier - a Green Beret clearing the way for his 12-man team while conducting combat operations against the Taliban. As the "tip of the spear", his role is to ensure the route taken by US and Afghan troops are free of IEDs - improvised explosive devices. Many soldiers do not survive their last step; those who do often lose at least one limb. While rescuing an Afghan soldier outside a mud-hut compound in 2010 - knowing that he was in "uncleared" territory - Ryan stepped on an IED with his right foot. The device exploded, leaving his foot dangling at the end of his leg. American soldiers losing a limb is an all-too-common occurrence. But what makes Ryan's story different is that after undergoing two dozen surgeries and a tortuous rehabilitation, he was medically retired but fought to return to active duty. Multiple skin grafts to his lower leg and right foot successfully reattached his lower leg, and he was aided in his recovery by wearing a new prosthetic device known as an IDEO (intrepid dynamic exoskeletal orthosis). Once he passed a series of crucial physical tests, Ryan was able to rejoin the Green Berets within a year and physically perform his duties, redeploying to Afghanistan in March 2012. In 2016, he volunteered to return to Afghanistan with Bravo Company, Second Battalion, Seventh Special Forces Group. During a firefight with the Taliban, he risked his life under heavy enemy fire to rescue three Afghan soldiers cut off from friendly forces and return the bodies of two dead Afghan soldiers under the ethos that "no one gets left behind". For his heroic efforts on the battlefield, SFC Ryan Hendrickson was awarded a Silver Star, the nation's third-highest award for valor. An engaging and harrowing account, Tip of the Spear tells the amazing story of one Green Beret's indomitable spirit.