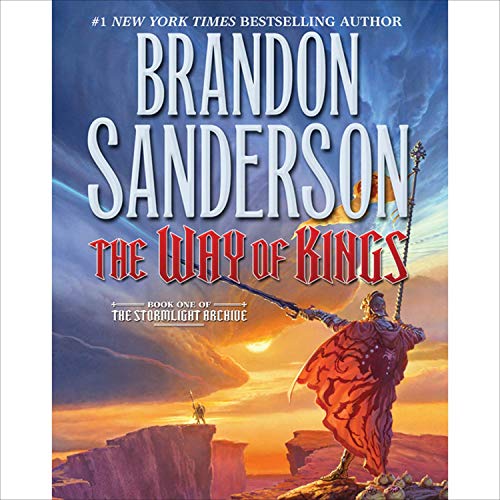 The Way of Kings

From number one New York Times best-selling author Brandon Sanderson, The Way of Kings, book one of the Stormlight Archive, begins an incredible new saga of epic proportion. Roshar is a world of stone and storms. Uncanny tempests of incredible power sweep across the rocky terrain so frequently that they have shaped ecology and civilization alike. Animals hide in shells, trees pull in branches, and grass retracts into the soilless ground. Cities are built only where the topography offers shelter. It has been centuries since the fall of the 10 consecrated orders known as the Knights Radiant, but their Shardblades and Shardplate remain: mystical swords and suits of armor that transform ordinary men into near-invincible warriors. Men trade kingdoms for Shardblades. Wars were fought for them and won by them. One such war rages on a ruined landscape called the Shattered Plains. There, Kaladin, who traded his medical apprenticeship for a spear to protect his little brother, has been reduced to slavery. In a war that makes no sense, where 10 armies fight separately against a single foe, he struggles to save his men and to fathom the leaders who consider them expendable. Brightlord Dalinar Kholin commands one of those other armies. Like his brother, the late king, he is fascinated by an ancient text called The Way of Kings. Troubled by over-powering visions of ancient times and the Knights Radiant, he has begun to doubt his own sanity. Across the ocean, an untried young woman named Shallan seeks to train under an eminent scholar and notorious heretic, Dalinar's niece, Jasnah. Though she genuinely loves learning, Shallan's motives are less than pure. As she plans a daring theft, her research for Jasnah hints at secrets of the Knights Radiant and the true cause of the war. The result of more than 10 years of planning, writing, and world-building, The Way of Kings is but the opening movement of the Stormlight Archive, a bold masterpiece in the making. Speak again the ancient oaths: Life before death. Strength before weakness. Journey before destination. And return to men the Shards they once bore. The Knights Radiant must stand again. Other Tor books by Brandon Sanderson: The Cosmere The Stormlight Archive: The Way of Kings Words of Radiance Edgedancer (Novella) Oathbringer  The Mistborn trilogy: Mistborn: The Final Empire The Well of Ascension The Hero of Ages Mistborn: The Wax and Wayne series: Alloy of Law Shadows of Self Bands of Mourning Collection: Arcanum Unbounded Other Cosmere novels: Elantris Warbreaker The Alcatraz vs. the Evil Librarians series: Alcatraz vs. the Evil Librarians The Scrivener's Bones The Knights of Crystallia The Shattered Lens The Dark Talent The Rithmatist series: The Rithmatist Other books by Brandon Sanderson: The Reckoners Steelheart Firefight Calamity   PLEASE NOTE: When you purchase this title, the accompanying PDF will be available in your Audible Library along with the audio. 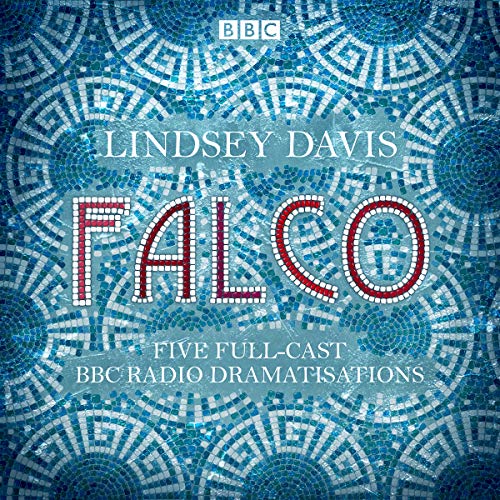 Full-cast BBC Radio 4 dramatisations of the first five Falco novels by Lindsey Davis, starring Anton Lesser as Marcus Didius Falco. The Silver Pigs:  One fine day, AD 70, Sosia Camillina quite literally runs into Marcus Didius Falco on the steps of the Forum. It seems Sosia is on the run from a couple of street toughs, and after a quick and dirty rescue, PI Falco wants to know why. Hoping for future favours from Sosia's powerful uncle, Falco embarks on an intricate case of smuggling, murder, and treason that reaches into the palace itself. Shadows in Bronze:  Rome, AD 71. Against his better judgment, Marcus Didius Falco secretly disposes of a decayed corpse for the Emperor Vespasian, then heads for the beautiful Bay of Naples with his friend Petronius. But this will be no holiday: they have been sent to investigate the murderous members of a failed coup, now sunning themselves in luxurious villas and on fancy yachts in Neapolis, Capreae, and Pompeii.  Venus in Copper:  A small accounting error has left Marcus Didius Falco sharing a cell with a large rat. But the Roman Empire's most hard-done-by investigator is finally bailed out and promptly accepts a commission to help a family of freed slaves fend off a professional bribe.... The Iron Hand of Mars:  Falco is dispatched to one of the most hostile parts of the empire to deliver a new standard, an iron hand, to one of the legions. Germania is cold, wet, dismal and full of dark forests inhabited by bloodthirsty barbarians, but Falco has an even bigger problem to worry about: he has forgotten Helena Justina's birthday, and she is being pursued by the Emperor's son Titus Caesar.  Poseidons Gold:  Returning to Rome after his mission to Germania, Falco finds that his mother is being harassed by a centurion named Censorinus, who says he is chasing a debt owed to him by Falco's late brother, Festus. When Falco refuses to cough up the money, he and Censorinus end up fighting...and later, the centurion turns up dead. Under suspicion of murder, Falco must confront his past and uncover his brother's secrets before he can clear his name and solve the mystery. These funny and fast-moving adaptations are a treat for all Falco fans. Cast:    Falco...Anton Lesser    Helena...Fritha Goodey/Anna Madeley    Petronius...Ben Crowe    Ma...Frances Jeater    Pa...Trevor Peacock    Vespasian...Michael Tudor Barnes    Titus...Jonathan Keeble Dramatised by Mary Cutler    Directed by Peter Leslie Wild Audio updated as of February 2020. 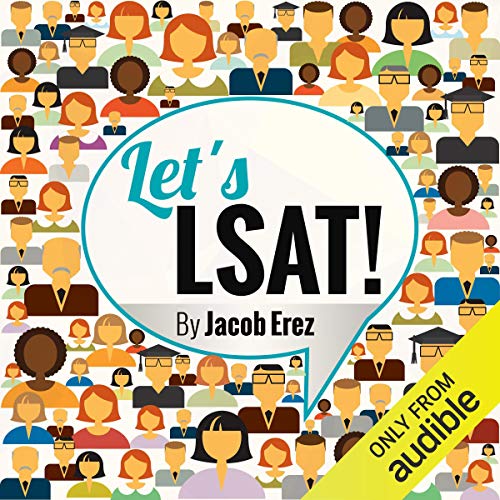 Are you looking to dominate the LSAT and land a spot at your dream law school? Let's LSAT! is a valuable collection of 180 tips from 180 top-scoring LSAT students from across the nation! These unique tips, tricks, and techniques, many of which have never been published before, can help you get an insider look at how the test works and give you an incredible advantage. Just a few samples of what you will learn in this book: An amazing technique to improve your natural comprehension How to master logic games like a pro What your favorite movies can teach you about main point questions (it's not what you think) Where and when to study - yes, it matters! Let's LSAT! is a perfect supplement for any LSAT material you are already using. It is a must-listen for anybody serious about improving their LSAT score. Competition for attendance at the top law schools is fierce; you need the best LSAT score you can get. Now you can learn from the best and the brightest - we've collected tips from students who scored in the 99th percentile for a first ever collection of 180 tips to guide you to LSAT success! So let's get started! It's time to knuckle down and let this study guide take your LSAT scores to the next level! 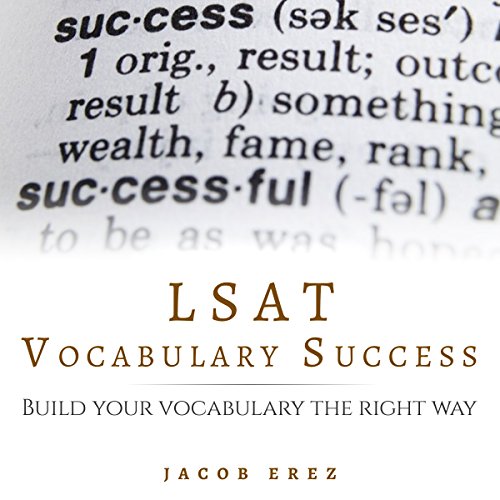 Stop - Don't take the LSAT without developing this vital skill first! We've helped numerous students improve their score with a simple trick that gives them a shocking advantage over the competition. Get a higher LSAT score, and get into the law school of your dreams! This is a unique mastery program that does more than just build your vocabulary - it teaches you to read using context clues, helping you understand the vocabulary words on a deeper level. For each of the 250 common LSAT vocabulary words, you will listen to three sentences that will force your brain to dissect the unfamiliar word's meaning. Don't just memorize your vocabulary words - master them! Take control of your LSAT score and your future today! 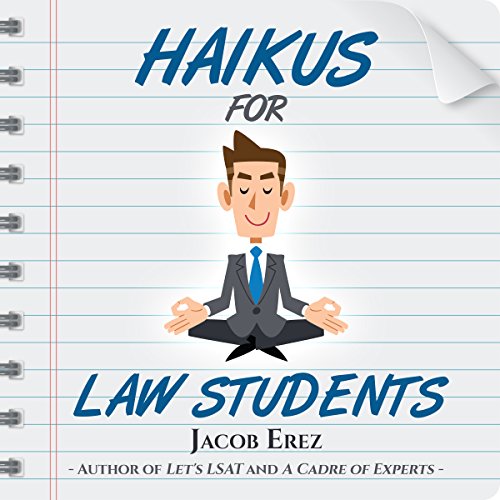 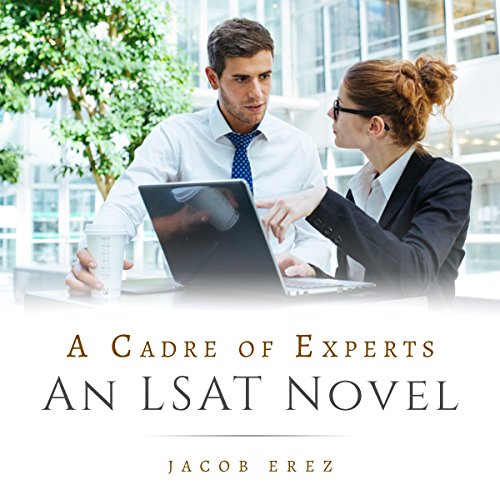 A Cadre of Experts: An LSAT Novel

A Cadre of Experts is an important guide for mastering the LSAT - as well as the moving story of a young woman's journey on her way to law school. Ripe with relatable tension and a sprinkle of humor, A Cadre of Experts thoroughly details essential LSAT concepts and exam strategies, all told through the growing friendship between Alexandra and Noah as they travel the country to consult with various experts in preparation for the exam. More than anything, Alexandra London wants to conquer the LSAT and get into a great law school. Will she succeed? As an average student, Alexandra's task seems insurmountable. But with the help of Noah, a successful attorney and former LSAT instructor, along with Noah's expert friends and Alexandra's relentless tenacity and laser-focused study, this unique educational-fiction reveals a path to LSAT success anyone can follow. We are witness to the emotional roller-coaster that Alexandra rides, sharing the highs of overconfidence and the lows of discouragement that many students face along the way. We are encouraged by Alexandra's intellectual, and, just as important, emotional growth. Start you own journey and master the LSAT together with Alexandra and Noah, and start listening to A Cadre of Experts!