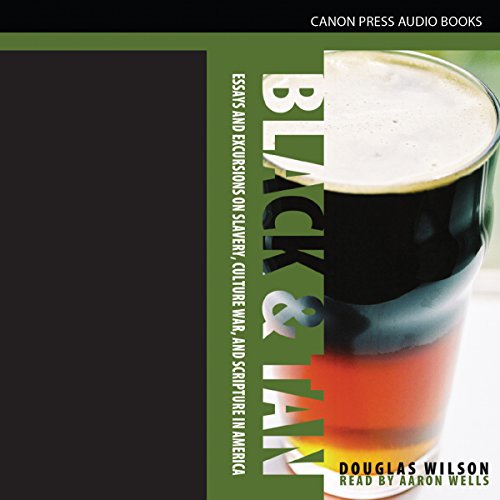 Even though America is fiercely divided between the left and the right and protests are becoming increasingly violent, both sides of the political aisle remain committed to secularism and increasingly to looser standards of sexual propriety. If we want to understand contemporary American culture wars, we must first come to grips with the culture wars of the 19th century. In this book, Douglas Wilson explains how our nation's failure to remove slavery in a biblical fashion has led us to many of the quagmires we find ourselves in and until we grapple with issues like racism, hate speech, and the biblical position on slavery, we will continue to repeat the same mistakes our ancestors did. This collection of essays lays out the answers from a view unafraid of historic, biblical orthodoxy, as well as addressing some of the controversies surrounding the previous edition of the book. 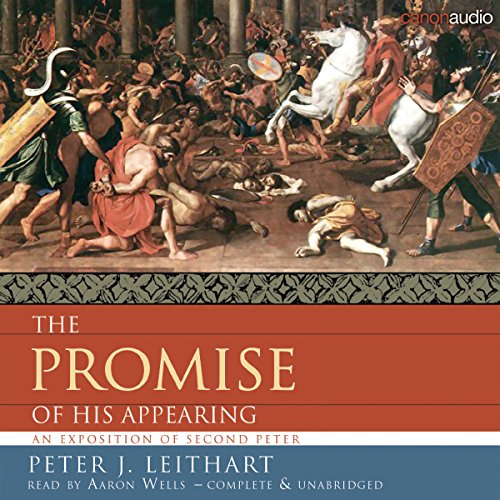 The Promise of His Appearing

The second book of Peter has long troubled biblical scholars and interpreters. Not only is its authorship debated, but it seems to predict an imminent Second Coming, making many dispensationalists claim that it can only be understood in light of modern events. In this study, Peter Leithart offers a preterist reading of the epistle, arguing that it describes first-century events and not the end of the world. At the same time, he maintains orthodoxy, avoiding hyper-preterism and affirming the epistle's authenticity. Leithart's accessible style and convincing arguments make a valuable addition to the study of the Bible's apocalyptic prophecies. 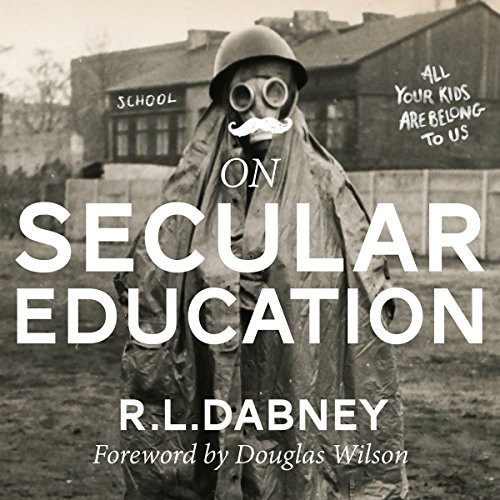 R. L. Dabney (1820-1898) - preacher, theologian, soldier, poet, and essayist - strongly condemned the public education of his day. He saw with prophetic insight that State education could not help but be secularized since it was designed to please the people. As a result, he argued, public education would begin to teach its students not truth, but the values and virtues which were palatable to society at large. Although a century has passed since Dabney first wrote this essay, the questions that parents face haven't changed. Secular education still seeks to indoctrinate our children under the pretence of objectivity, and truth is still sacrificed for the sake of social "unity." We must acknowledge with Dabney that proper education is about heart and soul, not just propositions and facts. Only then will our children learn truth and be equipped to live out our faith. 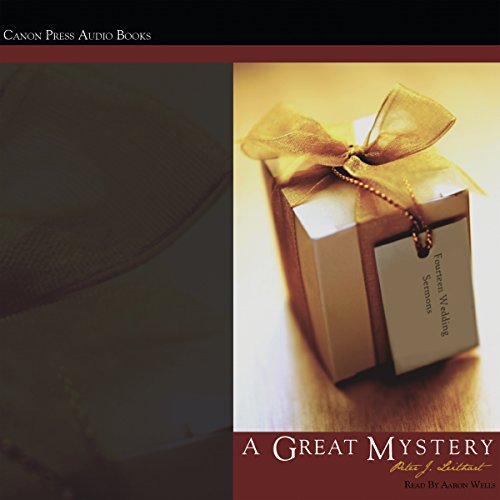 At a time when the institution of marriage is failing in our culture, Christians are making a renewed commitment to discover the richness of biblical marriages as the foundation of society. In this collection of wedding sermons, Peter Leithart illuminates the subject from many perspectives, forming a loose, down-to-earth "systematic theology of marriage" that connects marriage with the doctrines of creation, salvation, sacraments, church, eschatology, and more. The result is a series of enlightening and invigorating exhortations for Christian couples at any stage of their married life. 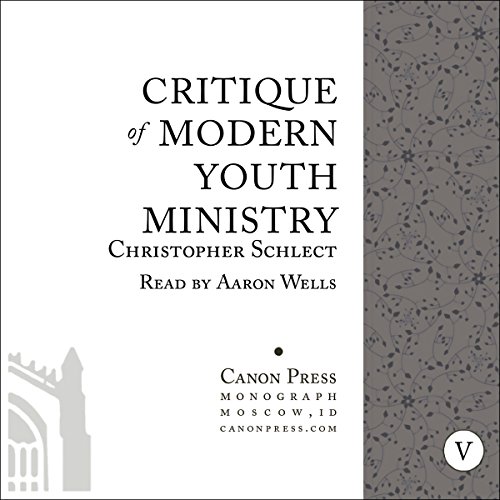 Today, everybody seems to be trying desperately to pander to young people in the church, even as growing numbers flee from it. This is largely because the church today does not expect what it ought to from children or their parents, and this can be attributed, at least in part, to a flawed concept of youth ministry. This need not, and should not, be so.Â Â  Brief but striking, this audiobooklet by Dr. Chris Schlect traces the historical origins of present-day youth ministry and sifts through the people and ideas that contributed to its development. It also provides an honest, biblical starting place for discussing the nature and purpose of youth ministry.Â  Above all, the intent of this audiobook is to turn the hearts of the fathers to their children, and the hearts of the children to their fathers. 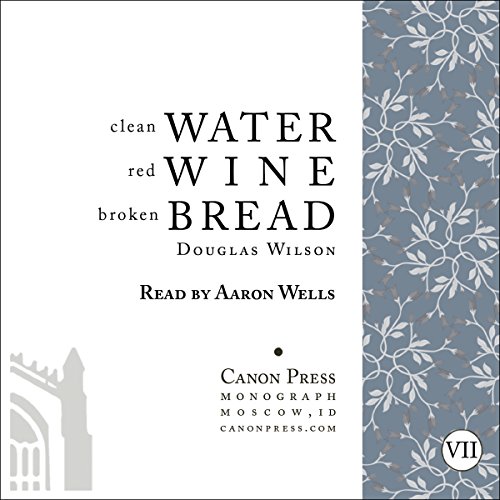 The Christian faith proclaims a standing invitation to a grand and glorious banquet. But those who wish to attend this feast must first be washed. This washing is declared by the clean water of baptism. After we are washed, we may sit down at the Lord's Supper, consisting of red wine and broken bread.Â Â  An invitation to this banquet is too gracious to be dismissed out of hand, and it is too profound to accept glibly. The Christian faith is a serious and demanding religion, founded on the gladness and delight of God. As a faith, it is an all-encompassing worldview which cannot be reduced to cute little slogans. 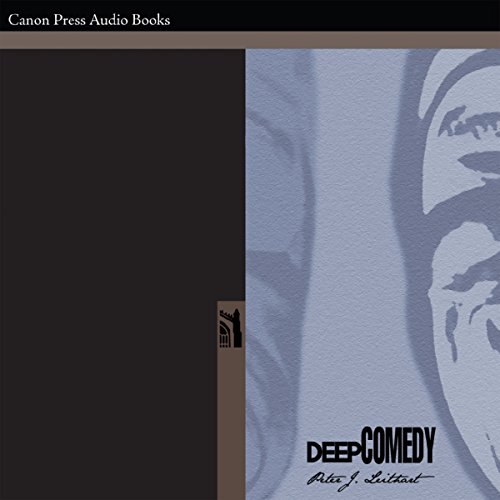 In this short but stimulating work, Peter Leithart draws upon insights from history, theology, philosophy, and literature to connect two of the most glorious and unique truths of Christianity - its hopeful eschatology and its doctrine of a dynamic, personal Trinity.Â  First, Leithart shows that the biblical view of history is essentially comic and hopeful, in contrast to the classical Greco-Roman view, which is essentially and irredeemably tragic. Then he develops the same point by examining Greek philosophy and its descendants (including postmodernism) in contrast to orthodox Trinitarian theology. Finally, he shows how the tragic and comic worldviews have been reflected in literature, with discussions of Greek epics and two Shakespearean plays. The result is a tour through 3000 years of intellectual history that celebrates the living power of orthodoxy. 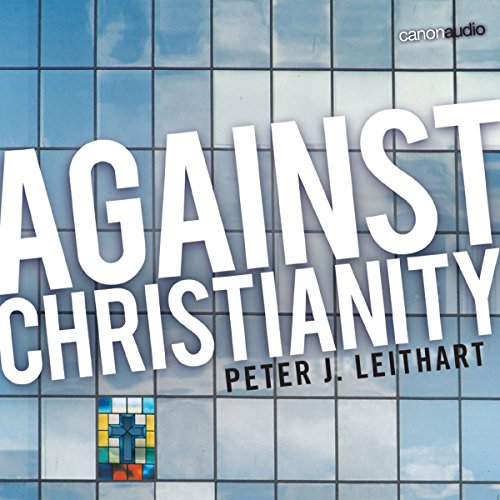 How could a conservative Christian - an ordained minister with a beard, no less - be against not only Christianity, but theology, sacraments, and ethics as well? Yet that is the stance Peter Leithart takes in this provocative "theological bricolage."Â  Seeking to rethink evangelical notions of culture, church, and state, Leithart offers a series of short essays, aphorisms, and parables that challenge the current dichotomies that govern both Christian and non-Christian thinking about church and state, the secular and the religious. But his argument isn't limited to being merely "against." Leithart reveals a much larger vision of Christian society, defined by the stories, symbols, rituals, and rules of a renewed community - the city of God.