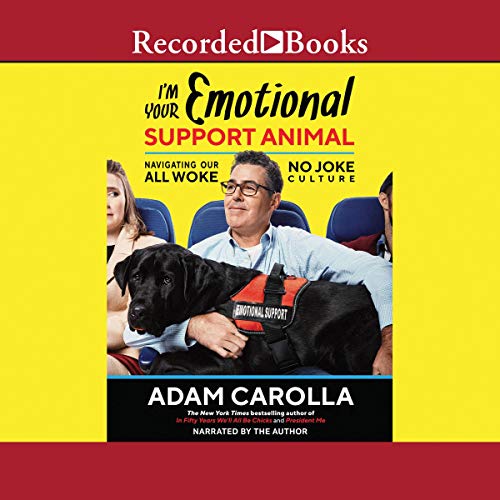 Three-time New York Times best seller Adam Carolla is back to take on social media, social justice warriors, and a society gone to s**t. In Im Your Emotional Support Animal, Adam Carolla examines how our culture went careening off a cliff. We used to have one that created real warriors who fought world wars. Now it spawns social justice warriors who fight Twitter wars. He takes on those who are traumatized by Trump and emotional support animal owners who proclaim their victimhood at every airport. He stands up for the collateral damage of the #MeToo movement and for freedom of speech on safe space filled college campuses.  Examining the calculated commercials churned out by Madison Avenue, like the ones about cars made with love, Carolla rants on ads designed to either bum us out or make us think the corporation is run by Mr. Rogers. Turning to social media, Adam takes down the hashtag heroes who signal their virtue daily from atop Twitter mountain. And in the era of the Roomba, performances by dead celebrity holograms, and meals-on-demand delivery services, he looks down the road at our not-so-bright future as a species. Frank, funny, and utterly unapologetic, this is not a book for those who need a trigger warning, but is THE book for everyone who wants to hit the snooze bar on the woke culture.

The comedian, actor, television host, podcast king, and New York Times best-selling author of President Me, Not Taco Bell Material, and In Fifty Years We'll All Be Chicks now lays down the law on the plight of the modern parent. Parents, do you often think that if your kids had to grow up the way you did - without iPads, 70-inch flatscreen TVs, American Girl dolls, and Wi-Fi in the climate-controlled minivan - they might actually be better off? Do you feel underappreciated or ignored? Do you worry you're raising a bunch of spoiled softies who will never know how to do anything themselves - because you do everything for them? If you answered yes to any of these questions, you need Daddy, Stop Talking. Adam rips parenthood a new one, telling it straight about what adults must do if they don't want to have to support their kids forever. Using his own crappy childhood as a cautionary tale, and touting the pitfalls of the kind of helicopter parenting so pervasive today, Daddy, Stop Talking is the only parenting book you should ever read. Here, too, is sage advice to Adam's own kids - and to future parents - on what matters most: dating; drinking and drugs; buying your first house and car; puberty; and what kind of assholes his kids (and yours) should avoid becoming. Even if his own son and daughter pretty much ignore everything he says, you shouldn't. And you're welcome. Again.

In his second book, Adam Carolla - chart-topping podcaster and author of New York Times best seller In Fifty Years We'll All Be Chicks - reveals all the stories behind how he came to be the angry middle-aged man he is today. Funnyman Adam Carolla is known for two things: hilarious rants about things that drive him crazy and personal stories about everything from his hardscrabble childhood to his slacker friends to the hypocrisy of Hollywood. He tackled rants in his first book, and now he tells his best stories and debuts some never-before-heard tales as well. Organized by the myriad "dumps" Carolla called home as a child - through the flophouse apartments he rented in his 20s, up to the homes he personally renovated after achieving success in Hollywood - the anecdotes here follow Adam's journey and the hilarious pitfalls along the way. Adam Carolla started broke and blue collar and has now been on the Hollywood scene for over 15 years. Yet he never lost his underdog demeanor. He's still connected to the working class guy he once was, and delivers a raw and edgy, fish-out-of-water take on the world in which he lives (but with which he mostly disagrees), telling all the stories, no matter who he offends - family, friends or the famous. 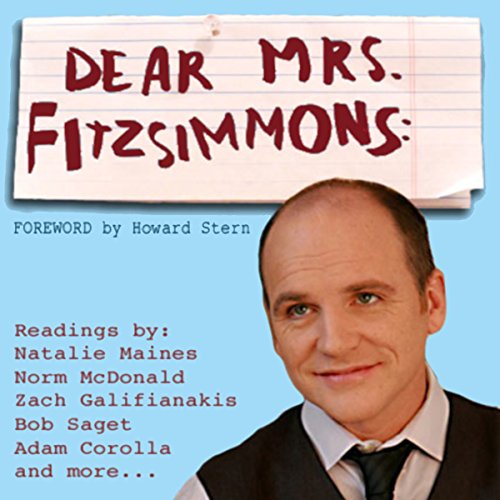 PARENTS: DO NOT TRY THIS AT HOME Greg Fitzsimmons has made a lot of what appear to be bad decisions. It's what he was raised to do. Most parents would hide or destroy any evidence so clearly demonstrating their child's failures, but - lucky for us - Greg Fitzsimmons's family has preserved each mistake in its original envelope like a trophy in a case, lest he ever forget where he came from. Dear Mrs. Fitzsimmons is Greg's life, told through this cavalcade of disciplinary letters, incident reports, and newspaper clippings that his parents received from teachers and school officials. Greg picks up where his parents left off with his own collection of letters received during college and throughout his successful career as a writer, producer, and stand-up comic. Revealing the larger story of how Greg's distinctly dysfunctional Irish-American family bred him to blindly challenge anyone, anytime, anywhere, over anything, Dear Mrs. Fitzsimmons comes full circle to show that the Fitzsimmons torch has been passed on proudly to a new generation. 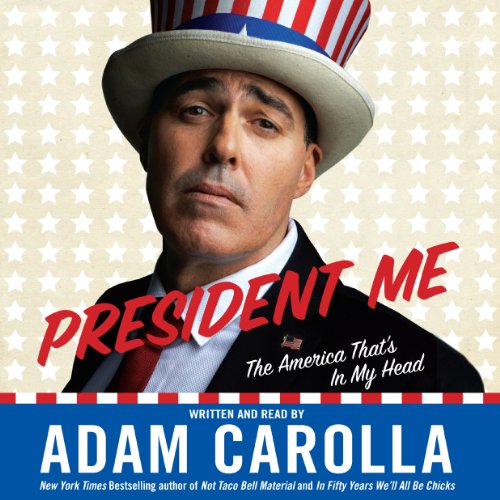 Imagine a world where New York Times best-selling author, comedian, actor, television, and podcast host Adam Carolla is the President of the United States. Cant do it? You dont have to! Adam has done it for you! Podcast king Adam Carolla first shared his unique, but always funny world view in his New York Times best seller, In Fifty Years Well All Be Chicks - but hes not done. In President Me, Carolla shares his vision for a different, better America free from big issues like big government down to small problems like hotel alarm clock placement. Running on an anti-narcissism platform, President Carolla calls for a return to the values of an earlier time when stew and casserole were on every dinner table and there were no service dogs on airplanes. President Me hits right at the heart of what makes our country really annoying, and offers a plan to make all of our lives, but mostly Adams, much better. 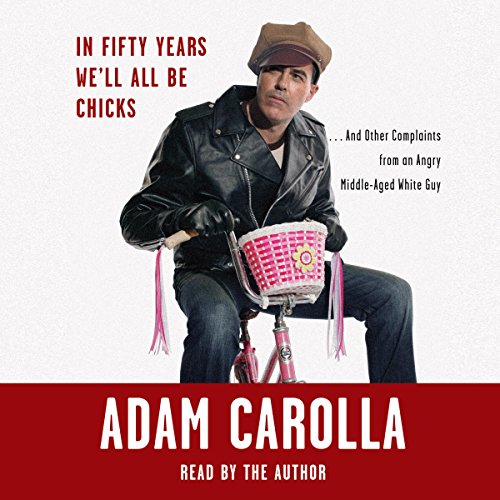 In Fifty Years We'll All Be Chicks...

"A couple years back, I was at the Phoenix airport bar. It was empty except for one heavy-set, gray bearded, grizzled guy who looked like he just rode his donkey into town after a long day of panning for silver in them thar hills. He ordered a Jack Daniels straight up, and that's when I overheard the young guy with the earring behind the bar asking him if he had ID. At first the old sea captain just laughed. But the guy with the twinkle in his ear asked again. At this point it became apparent that he was serious. Dan Haggerty's dad fired back, 'You've got to be kidding me, son.' The bartender replied, 'New policy. Everyone has to show their ID.' Then I watched Burl Ives reluctantly reach into his dungarees and pull out his military identification card from World War II."  It's a sad and eerie harbinger of our times that the Oprah-watching, crystal-rubbing, Whole Foods-shopping moms and their whipped attorney husbands have taken the ability to reason away from the poor schlub who makes the Bloody Marys. What we used to settle with common sense or a fist, we now settle with hand sanitizer and lawyers. Adam Carolla has had enough of this insanity and he's here to help us get our collective balls back.  In Fifty Years We'll All Be Chicks is Adam's comedic gospel of modern America. He rips into the absurdity of the culture that demonized the peanut butter and jelly sandwich, turned the nation's bathrooms into a lawless free-for-all of urine and fecal matter, and put its citizens at the mercy of a bunch of minimum wagers with axes to grind. Peppered between complaints Carolla shares candid anecdotes from his day to day life as well as his past Sunday football at Jimmy Kimmel's house, his attempts to raise his kids in a society that he mostly disagrees with, his big showbiz break, and much, much more. Brilliantly showcasing Adam's spot-on sense of humor, this book cements his status as a cultural commentator/comedian/complainer extraordinaire. Adam Carolla is a radio and television host, comedian, and actor. He is the host of the "Adam Carolla Podcast", before which he hosted a weekday morning radio program broadcast from Los Angeles, and syndicated by CBS Radio. Besides these shows, Carolla is well known as the co-host of the radio show "Loveline" (and its television incarnation on MTV), as the co-creator and co-host of Comedy Central's The Man Show, and as the co-creator and the performer on Comedy Central and MTV's Crank Yankers and is a frequent contributor and contestant on ABC's top-rated program Dancing with the Stars. Carolla also starred in, co-wrote, and co-produced the award-winning independent film, The Hammer. He currently lives in Los Angeles with his wife and their two children.