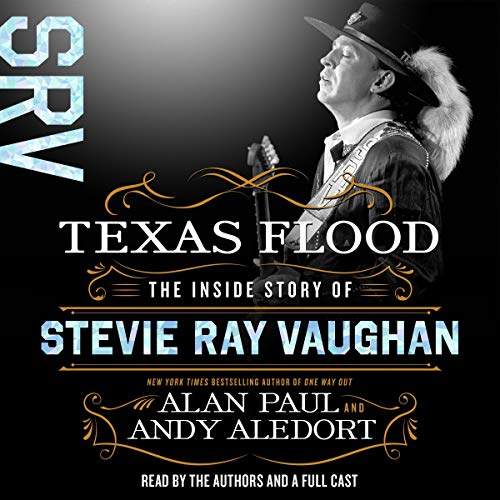 âAn oral history is only as good as its sources, and Texas Flood is thorough and far-reaching, with Vaughan's bandmates, crew and family taking center stage.â (New York Times Book Review)Â  This program is read by a full cast and features exclusive bonus material, including a never-before-heard conversation between Stevie Ray Vaughan and his brother, Jimmie Vaughan. The first definitive biography of guitar legend Stevie Ray Vaughan, with an epilogue by Jimmie Vaughan, and foreword and afterword by Double Troubleâs Chris Layton and Tommy Shannon. Just a few years after he almost died from a severe addiction to cocaine and alcohol, a clean and sober Stevie Ray Vaughan was riding high. His last album was his most critically lauded and commercially successful. He had fulfilled a lifelong dream by collaborating with his first and greatest musical hero, his brother Jimmie. His tumultuous marriage was over, and he was in a new and healthy romantic relationship. Vaughan seemed poised for a new, limitless chapter of his life and career. Instead, it all came to a shocking and sudden end on August 27, 1990, when he was killed in a helicopter crash following a dynamic performance with Eric Clapton. Just 35 years old, he left behind a powerful musical legacy and an endless stream of what-ifs. In the ensuing 29 years, Vaughanâs legend and acclaim have only grown, and he is now an undisputed international musical icon. Despite the cinematic scope of Vaughanâs life and death, there has never been a truly proper accounting of his story. Until now.Â  Texas Flood provides the unadulterated truth about Stevie Ray Vaughan from those who knew him best: his brother Jimmie, his Double Trouble bandmates Tommy Shannon, Chris Layton, and Reese Wynans, and many other close friends, family members, girlfriends, fellow musicians, managers, and crew members.Â  This program is read by Alan Paul, Andy Aledort, Chris Layton, Leslie Ligon, Greg Littlefield, Denny Freeman, Jack Newhouse, Leon Nixon, Joe Priesnitz, Tommy Shannon, and Reese Wynans. PLEASE NOTE: When you purchase this title, the accompanying PDF will be available in your Audible Library along with the audio.