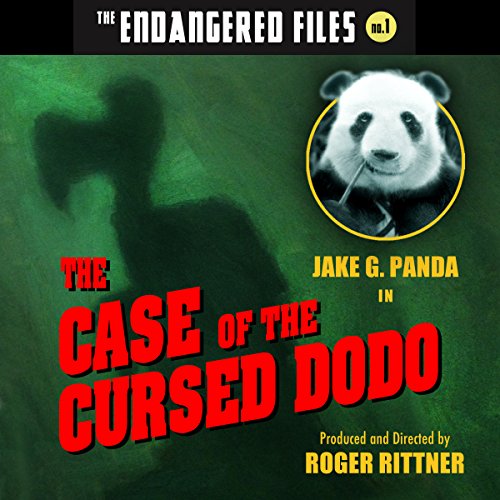 The Case of the Cursed Dodo

It's a Mad, Mad, Mad, Mad World meets The Maltese Falcon with plenty of jokes and gags to keep you laughing out loud. If you loved Who Framed Roger Rabbit or Zootopia this is the audio adventure for you! The Case of the Cursed Dodo is a hilarious throwback to old time radio serials starring a hardboiled Winnie-the-Pooh. His name's Jake G. Panda, and he's a wildlife investigator. He works at a flophouse for endangered critters called the Last Resort. He's the hotel snoop. The resident fuzz.Â  It's his job to keep these unusual guests safe and out of harm's way. This first installment of The Endangered Files is a wild and woolly mystery involving a missing guest, a green bird, and a bunch of double-crossing critters all hot on the trail of a valuable artifact called The Cursed Dodo.Â  This audiobook is designed to introduce young listeners to the subject of endangered species in a fun and informative way. So join this tough talking panda detective and a cast of endangered creatures on a globe-trotting audio adventure that will appeal to the kid in all of us.Â Â  The complete list of narrators includes:Â Michael McConnohie, J.W. Terry, Dave Mallow, Molly Brandenburg, Antoinette Attell, Ian Whitcomb, Barbara Watkins, and Bobb Lynes.