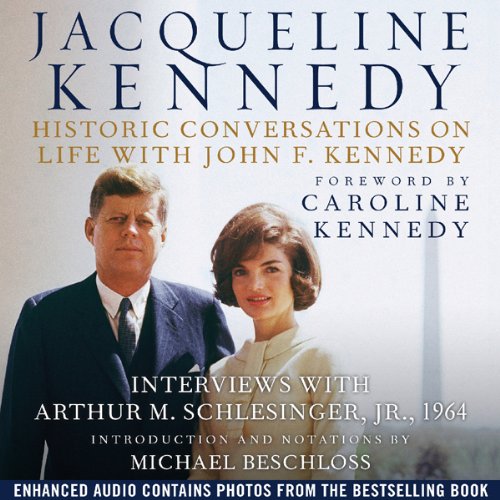 In 1964, Jacqueline Kennedy recorded seven historic interviews about her life with John F. Kennedy. Now, decades later, these conversations can be heard in this digitally remastered eight-and-a-half-hour audio program. This audiobook includes the foreword written and read by Caroline Kennedy; introduction written and read by historian Michael Beschloss and the photos from the hardcover book, as well as complete annotations from Michael Beschloss, both in downloadable PDF format. Shortly after President John F. Kennedyâs assassination, with a nation deep in mourning and the world looking on in stunned disbelief, Jacqueline Kennedy found the strength to set aside her own personal grief for the sake of posterity and begin the task of documenting and preserving her husbandâs legacy. In January of 1964, she and Robert F. Kennedy approved a planned oral-history project that would capture their first-hand accounts of the late president as well as the recollections of those closest to him throughout his extraordinary political career. For the rest of her life, the famously private Jacqueline Kennedy steadfastly refused to discuss her memories of those years, but beginning that March, she fulfilled her obligation to future generations of Americans by sitting down with historian Arthur Schlesinger, Jr., and recording an astonishingly detailed and unvarnished account of her experiences and impressions as the wife and confidante of John F. Kennedy. The tapes of those sessions were then sealed and later deposited in the John F. Kennedy Presidential Library and Museum upon completion, in accordance with Mrs. Kennedyâs wishes. The resulting eight-and-a-half hours of material comprise a unique and compelling record of a tumultuous era, providing fresh insights on the many significant people and events that shaped JFKâs presidency, but also shedding new light on the man behind the momentous decisions. As told by Mrs. Kennedy, here are JFKâs unscripted opinions on a host of revealing subjects, including his thoughts and feelings about his brothers, Robert and Ted, and his take on world leaders past and present, giving us perhaps the most informed, genuine, and immediate portrait of John Fitzgerald Kennedy we shall ever have. Mrs. Kennedyâs urbane perspective, her candor, and her flashes of wit also give us our clearest glimpse into the active mind of a remarkable First Lady. In conjunction with the 50th anniversary of President Kennedyâs inauguration, Caroline Kennedy and the Kennedy family are now releasing these beautifully restored recordings with accompanying annotations and photos from the John F. Kennedy Presidential Library as well as other sources. Introduced and annotated by renowned presidential historian Michael Beschloss, these interviews will add an exciting new dimension to our understanding and appreciation of President Kennedy and his time and make the past come alive through the words and voice of an eloquent eyewitness to history. PLEASE NOTE: When you purchase this title, the accompanying reference material will be available in your Library section along with the audio.