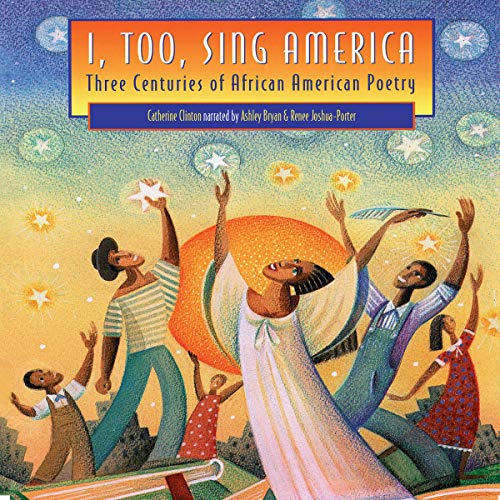 I, Too, Sing America

Starting with Lucy Terry of the early 18th century and finishing with poet laureate Rita Dove, this anthology edited by Catherine Clinton captures the talent and passion of black poets. Powerful and diverse, I, Too, Sing America is a forum for voices baring their souls, speaking their minds, tracing their roots, and proclaiming their dreams. Each of the 25 poets is introduced with a brief biography and poetry notes to help the listener place his or her work in context. Included in the anthology is: "I, Too, Sing America" by Langston Hughes "Bars Fight" by Lucy Terry "Liberty and Peace" by Phillis Wheatley "On Liberty and Slavery" by George Moses Horton "Yes! Strike Again That Sounding String" by James M. Whitfield "Bury Me in a Free Land" by Frances Ellen Watkins Harper "The Song of the Smoke" by W. E. B. Du Bois "Lift Ev'ry Voice and Sing" by James Weldon Johnson "We Wear the Mask" by Paul Laurence Dunbar "The Black Finger" by Angelina Weld Grimke "Your World" and "Interracial" by Georgia Douglas Johnson "Children of the Sun" by Fenton Johnson "If We Must Die" and "The White House" by Claude McKay "Beehive" by Jean Toomer "Heritage" and "To a Dark Girl" by Gwendolyn Bennett "A Black Man Talks of Reaping" by Arna Bontemps "Harlem," "The Negro Speaks of Rivers," "Merry-Go-Round," and "Cross" by Langston Hughes "Tableau," "Saturday's Child," and "Incident" by Countee Cullen "Sorrow Home" by Margaret Walker "Martin Luther King Jr.," "Malcolm X," and "We Real Cool" by Gwendolyn Brooks "Still I Rise" by Maya Angelou "Rites of Passage" by Audre Lorde "In the Year" by Amiri Baraka "The Funeral of Martin Luther King, Jr." by Nikki Giovanni "Women" by Alice Walker "Primer" by Rita Dove