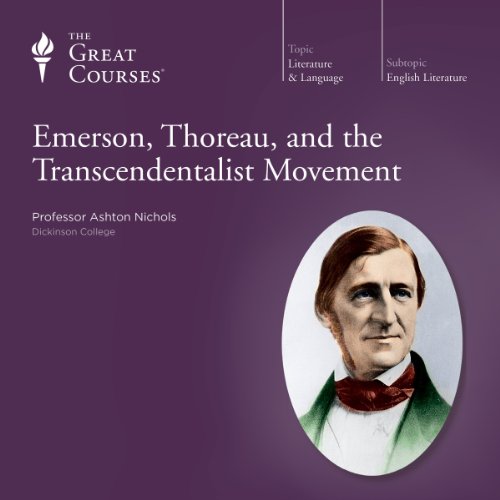 Emerson, Thoreau, and the Transcendentalist Movement

The America we know today is so different in its fundamental views about almost every aspect of life as to be unrecognizable to our countrymen of two centuries ago. On issues as divergent as slavery, women's rights, education, the environment, and many others, we are simply no longer the country we were. What is the source of not only these changes, but of our distinctly American way of experiencing ourselves-confident in our value as individuals, certain of our ability to discover truths, self-reliant in the face of uncertainty and change? Answers to questions like these and so many more are found in and around Boston and Concord, Massachusetts, which became, little more than five decades after the American Revolution, the epicenter of a profoundly influential movement that would make possible the America we know today. That movement was Transcendentalism-the subject of an extraordinary 24-lecture series by an award-winning teacher, scholar, and journalist. You'll learn how Transcendentalism-drawing on an array of influences from Europe and the non-Western world-also offered uniquely American perspectives of thought: an emphasis on the divine in nature, on the value of the individual and intuition, and on belief in a spirituality that might "transcend" one's own experienceto provide a guide for daily living. And you'll learn how Transcendentalism's impact was rooted in the intellectual energy of two remarkable individuals: Ralph Waldo Emerson, the most important figure behind Transcendentalism in America, and Henry David Thoreau, his most influential disciple. Along with a diverse group of intellectual activists, literary figures, and social reformers, their ideas would remake America. PLEASE NOTE: When you purchase this title, the accompanying reference material will be available in your Library section along with the audio.