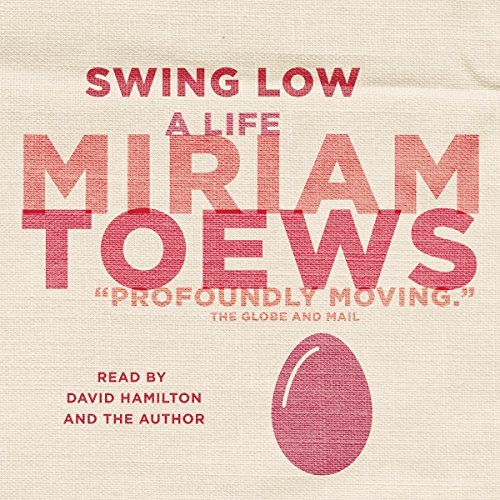 After her father took his own life in 1998, Miriam Toews decided to face her confusion and pain straight on. In writing her fathers memoir, she was motivated by two primary goals: For her own sake, she needed to understand, or at least accept, her fathers final decision. For her fathers sake, she needed to honour him, to elucidate his life, and to demonstrate its worth. Apart from its brief prologue and epilogue, Swing Low is written entirely from Mel Toewss perspective. Miriam Toews has her father tell his story from bed as he waits in a Steinbach hospital to be transferred to a psychiatric facility in Winnipeg. Mel turns to writing to make sense of his condition, to review his life in the hope of seeing it more clearly. He remembers himself as an anxious child, the son of a despondent father and an alcoholic mother, who never once made him feel loved. At 17 he was diagnosed with manic depression (now known as bipolar disorder). His psychiatrists predictions were grim: Mel shouldnt count on marrying, starting a family, or holding down a job. With great courage and determination, Mel went on to do all three: he married his childhood sweetheart, had two happy daughters and was a highly respected and beloved teacher for 40 years. Although Mel was able to keep his disorder hidden from the community, his family frequently witnessed his unraveling. Over the years this schism between his public and private life grew wider. An outgoing and tireless trailblazer at school, he often collapsed into silence and despair at home. Ironically, in trying to win his familys love through hard work and accomplishments, he deprived them of what they yearned for most: his presence, his voice. Once he retired from teaching - "the daily ritual of stepping outside himself" - Mel lost his creative outlet and, with it, his hope. In the Globe and Mail, author Moira Farr described Swing Low as "audacious, original and profoundly moving." She added: "Getting into the head of your own father - your own largely silent, mentally ill father, who killed himself - has to be a kind of literary high-wire act that few would dare to try. Healing is a likely outcome of a book imbued with the righteous anger, compassion and humanity of Swing Low."