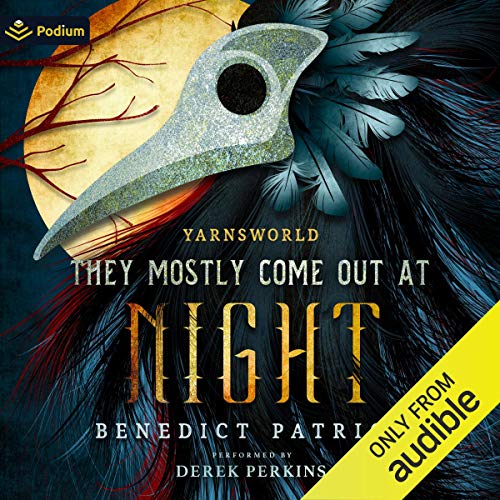 They Mostly Come Out at Night: A Yarnsworld Publisher's Pack

Contains two stand-alone books from Benedict Patricks Yarnsworld series. Series can be listened to in any order. They Mostly Come out at Night, book one The villagers of the forest seal themselves in their cellars at night, whispering folktales to each other about the monsters that prey on them in the dark. Only the Magpie King, their shadowy, unseen protector, can keep them safe. However, when an outcast called Lonan begins to dream of the Magpie Kings defeat at the hands of inhuman invaders, this young man must do what he can to protect his village. He is the only person who can keep his loved ones from being stolen away after dark, and to do so he will have to convince them to trust him again. From the Shadows of the Owl Queen's Court, book four If you value your life, stay out of the forest. As a captive of the Owl Queens Court, Naschas life has always been one knifes edge away from disaster. But when she is threatened for nothing more than the color of her hair, Nascha attempts the unthinkable: an escape through the dreaded Magpie Kings forest. Hunted by sharp-toothed and sharper-witted foxfolk and hated by all for being a witch, Nascha fears herself doomed until she joins forces with a mysterious young man. With him she finds a glimmer of hope, even as her own unpredictable powers flicker into existence. But hope is fleeting. The forces arrayed against her are insurmountable, and Nascha soon comes to realize that pursuit of her own freedom will come at a greater cost to the forest. As the darkness closes in around them, Nascha is forced to ask: At what price is she willing to purchase her life? How dearly is she willing to sell it? Includes a special note from the author. 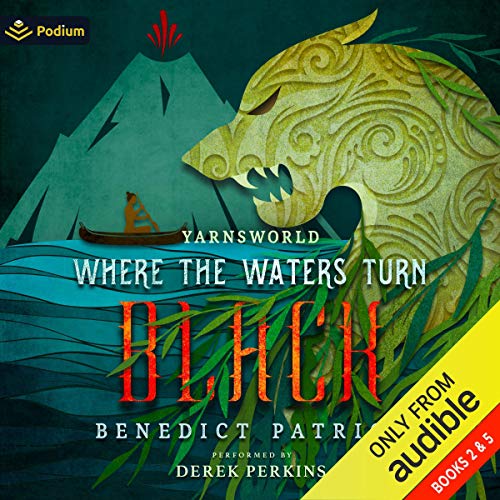 Where the Waters Turn Black

Contains two standalone books from Benedict Patricks Yarnsworld series. Series can be listened to in any order. Where the Waters Turn Black, book two What lurks beneath the waves? The Crescent Atoll is a remote string of tropical islands, connected by long canoe journeys and a love of stories. Islanders live in constant contact with gods and monsters, following the rules handed down by their storytellers to survive in harmony with these primal forces. However, when a young ocarina player called Kaimana discovers the lair of a taniwha - a legendary monster - she attracts the ruining gaze of the god of war. In a land of sea witches, pig-faced gods, and Magpie Kings, Kaimana must trust her growing friendship with her taniwha if they are both to survive. Inspired by the myths and legends of South Pacific island cultures, this book is perfect for those seeking a fantasy adventure in an unfamiliar world. To Dream and Die as a Taniwha Girl, book five There is a price to pay for becoming a story. Kaimana has defied the gods and won the freedom to spend the rest of her days travelling the collection of tropical islands she calls home. But the people of the islands have taken notice of her. They have started to tell her story; for many children, one of their favourite fireside tales is now that of the Taniwha Girl, the brave woman who befriends monsters. Some islanders even pray to her. The gods are displeased, but they are not the only ones paying attention to Kaimanas rise to fame. On the borders of the island ring, an ancient demon - an old enemy of the Crescent Atoll - spreads its influence, and a spider-faced figure shadows Kaimanas movements. To secure her own safety, and that of her island home, Kaimana has to make a choice: turn her back on the people of the Crescent Atoll and continue enjoying the life she has won for herself, or give up all she holds dear to live up to the legend of the Taniwha Girl. 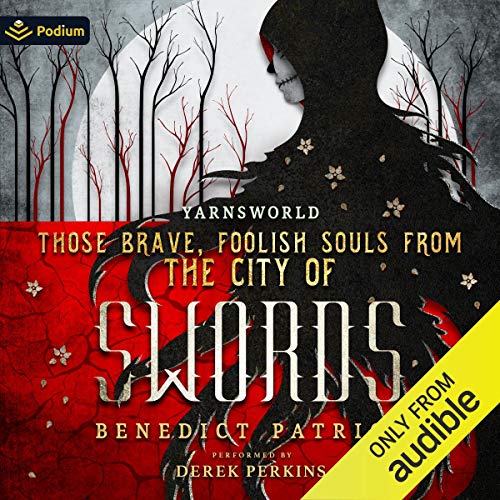 Those Brave, Foolish Souls from the City of Swords

Don't draw your blade in the City of Swords, unless you're willing to kill...or ready to die. Young and filled with idealistic fervor, Arturo packs his blade and travels to the fabled City of Swords in the hopes of joining the dashing Bravadori. Yet upon arriving, he discovers these masked vigilantes have more in common with brutal thugs than noble monster slayers. Disillusioned and mocked, he stubbornly refuses to give up his dreams. When an impending bandit attack threatens untold depravities upon a distant village, and no others will heed the call for help, Arturo joins forces with a worthless outcast and a walking legend to attempt the impossible: to traverse the demon-haunted wilderness and prove that in the City of Swords, true heroes can rise from the unlikeliest of places. Those Brave, Foolish Souls from the City of Swords is a gritty, action-packed stand-alone novel set in Benedict Patricks Yarnsworld, a land where folktales and fantasy mix, where the monsters from stories are real. Includes a bonus novella from the Yarnsworld series and a special note from the author.