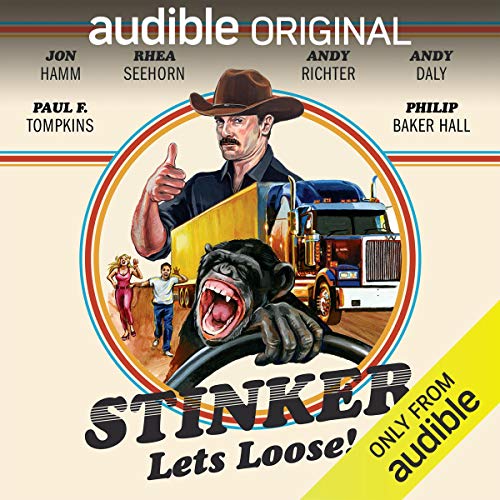 [Contains explicit content] The outrageous, madcap, and oft-forgotten 1977 cult movie classic is now finally available as a multi-cast audio extravaganza. You ain't never heard anything like it! Oh, and itâs now a New York Times audio bestseller! Bestselling author Mike Sacks (And Here's the Kicker, Poking a Dead Frog) has just discovered the original novelization of the long-lost classic movie, Stinker Lets Loose! Mike has teamed up with director Eric Martin to adapt the novelization into a fully immersive cinematic audio experience, and an epic all-star cast has come together to introduce Stinker to a whole new generation of fans! It's Smokey and the Bandit meets Every Which Way But Loose meets Smokey and the Bandit Parts 2 and 3. Feel the thrill as Stinker teams up with old pals Boner and Jumbo, plus new friends Buck and Rascal the Chimp, for a crazy ride across the highways and byways of Bicentennial America and meets scores of beautiful Southern gals, reams of treacherous villains, and even the Big Man! Will Stinker truly Let Loose? Or will Big Government and the Smokeys bring him down?Â  A loving send-up of a bygone era of trucker films and their beer-swillin', skirt-chasin', verb-shortenin' heroes, this audio adventure is a joyride in absurdity; with its rapid-fire jokes only matched by their total outrageousness. But enough of this jaw-jackin'. If you don't listen, then the joke's on you!Â  Now with a special bonus chapter! Enjoy a live performance of highlights from the audiobook, performed by a full cast of actors and musicians at SF Sketchfest. Tune into Chapter 50 for the full live show! Narrated and Directed by Eric Martin Starring Jon Hamm as Stinker Rhea Seehorn as Gwyneth Andy Daly as Boner John DiMaggio as Jumbo and Sheriff Sledge Paul F. Tompkins as Clarence Macleod and Mr. Walsh Jessica McKenna as Buck Kimmy Gatewood as Betty Mark Gagliardi as Big Red Justin Michael as Pip With James Urbaniak as President Jimmy Carter and Jeremiah King Guest Starring Andy Richter as Orville Max And Phillip Baker Hall as the Big Man Introduction by Mike Sacks Full cast includes: Scott Brick, RC Bray, Rachel Butera, Emily Woo Zeller, PJ Ochlan, Suzanne Elise Freeman, Heather Forte, Robert Beitzel, and Seth Allen Original songs by CJ McKnight as played by Mark Rozzo "This movie made my eyes bleed, and the book made pus run out of them. The two things were made for each other. They're awful and awfuler. This novelization stinks." - David Sedaris Rated R. Contains mature 1970's themes. Presented by Audible Comedy / An Audible Original Production