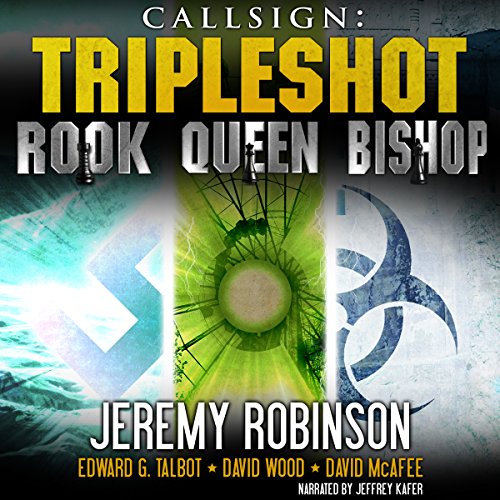 In 2011 Jeremy Robinson released a series of eight novellas deemed the Chesspocalypse. Each novella follows a single member of the Chess Team from his Jack Sigler Thrillers series. The stories take place after the events of Threshold, the third full-length novel in the series, and before the events of Ragnarok, the fourth. The novellas are all coauthored by Jeremy Robinson and one of six other fantastic authors. The Chesspocalypse novellas are designed to introduce readers to the series. If you haven't read the novels, no worries. Enjoy the ride! The stories were released in the following order: Callsign: King - Book 1 Callsign: Queen Callsign: Rook Callsign: King - Book 2 - Underworld Callsign: Bishop Callsign: Knight Callsign: Deep Blue Callsign: King - Book 3 - Blackout This collection contains the standalone Queen, Rook, and Bishop stories. Callsign: Queen At the beginning of her search for Rook, a missing Chess Team member, Zelda Baker--callsign: Queen--is redirected to Pripyat, Ukraine, a ghost town on the radioactive outskirts of Chernobyl. Intel indicates that a splinter cell of Manifold Genetics--a ruthless corporation dismantled by the Chess Team--may be operating in the area. Tasked with confirming the existence of a Manifold facility, Queen begins a recon sweep of the abandoned town in search of clues but soon finds herself fighting for her life. Something sinister lurks beneath the decaying, surreal remnants of Pripyat's never-used amusement park, and it rises up to greet Queen. In Pripyat the streets are empty, the derelict buildings crumble, but the bodies...are fresh. Callsign: Rook After a failed mission claims the lives of his five-man support team, Stan Tremblay--callsign: Rook--flees Siberia and finds himself on the secluded coast of Norway, north of the Arctic Circle. Exhausted, cut off from the outside world, and emotionally beaten from his defeat in Russia, Rook just wants to find somewhere to rest. The small coastal town of Fenris Kystby seems like the perfect place.< /p> Within hours of arriving, he discovers that the town is not as tranquil as it appears. The townspeople are mistrustful of outsiders, a pack of mysterious wolves stalks the local tundra, and two villagers have been killed by a creature that defies explanation. To make things worse, there are rumors of something sinister--something the townspeople refuse to discuss. Despite the hostility of the locals, Rook commits to stopping the creature from murdering townspeople. As the body count rises, he quickly learns that the greatest threat might walk on two legs. And when he uncovers the town's hidden past, Rook knows only one thing for certain: something is rotten in Norway. Callsign: Bishop An Iranian terrorist cell has gotten its hands on weaponized Ergot-B--a compound that causes violent hysteria, madness, and death within 24 hours--and plans to unleash the weapon in major cities around the world. Successful deployment would begin a bloodbath, as those exposed would kill everyone they encountered before succumbing to the compound's lethal effects. Erik Somers--callsign: Bishop--is called in to investigate, but his first discovery shocks him to the core. Dawoud Abbasi, the terrorist leader planning to unleash Ergot-B, is his biological father. Bishop, along with an undercover Delta operator--callsign: Joker--race across the unforgiving Iranian desert in search of the Ergot-B. Seeking answers both professional and personal, Bishop must fight against a private army, Iranian Special Forces, and men driven mad by Ergot-B. With the lives of his biological mother and countless more people in cities around the world in the balance, Bishop must call on all his strength not only to survive but to stop the man revealed as his father--even if he has to kill him. 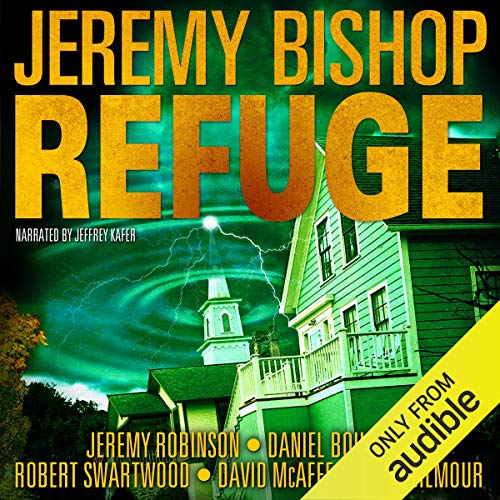 Refuge, New Hampshire, is a small town. The kind found on postcards. Their biggest concern is the rowdy summertime revelers making their way up from Massachusetts and New York. And with most of the town's residents in neighboring Ashland, for the Fourth of July fireworks show, Refuge is quieter than usual. That is, until the Baptist church's bell starts ringing - on its own. The bell chimes faster and faster, reaching a frenetic pace, as though rung by the Devil himself. But the bell is just the beginning. The air shimmers. The night-time sky fills with a burning red aurora. The moon, previously a crescent, is now full. And just hours after dusk, the sun returns to the sky, revealing an endless desert where there was once a mountainous pine forest. Led by ex-Army Ranger turned surrealist painter, Griffin Butler, Sheriff Rebecca Rule and her deputy, Helena Frost, the residents of Refuge must weather an ever changing onslaught of otherworldly dangers while trying to uncover how and why the landscape beyond town shifts every time the church bell tolls. As a sequence of horrific events threaten to destroy the town, the residents must band together, search for answers and find a way to defend their homes, or Refuge will be lost. Refuge is a serialized novel, co-authored by #1 Amazon.com horror author, Jeremy Bishop, and five other authors, including Amazon.com best sellers Kane Gilmour and David McAfee, USA Today best seller, Robert Swartwood, and newcomer Daniel Boucher. The novel was released in five parts, every two weeks beginning in late 2013, but it is now available as one complete novel. So listen for the individual parts or the whole completed novel. Either way, you're in for a creepy ride. 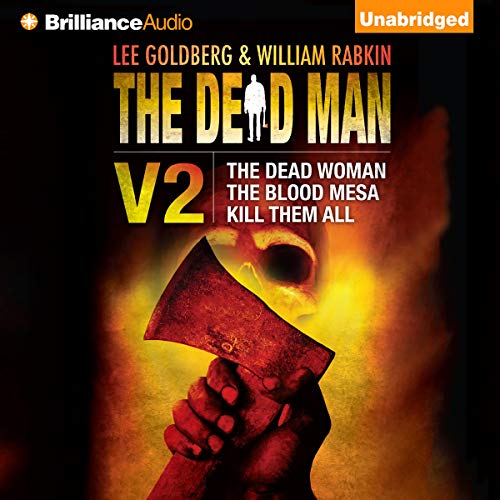 A shocking accident gave Matthew Cahill the ability to see a nightmarish netherworld that nobody else does, pitting him in a fight to save us all - and his own soul - from the clutches of pure evil in these three exhilarating tales of dark humor, nonstop action, and pure horror. Matt thought he was the only one who could see the evil in peoples souls as rotting flesh. But in David McAfees "The Dead Woman", in a town terrorized by a vicious serial killer, Matt meets a woman who may see the same dark world that what he does... James Reasoners "The Blood Mesa", Matt is working for a group of archeologists unearthing Native American ruins in a desolate corner of New Mexico...who inadvertently awaken an ancient terror with an insatiable hunger for human flesh. Matt is pursued by sadistic, professional mercenaries into a dying western town in Harry Shannons "Kill Them All". Now Matt must rally the peaceful citizens into defending themselves - or sacrifice himself to save them from certain death. 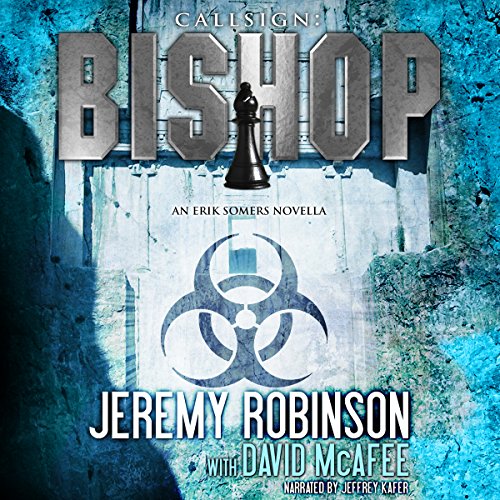 An Iranian terrorist cell has gotten its hands on weaponized Ergot-B, a compound that causes violent hysteria, madness and death within 24 hours,and plan to unleash the weapon on major cities around the world. Successful deployment would begin a bloodbath, as those exposed would kill everyone they encountered before succumbing to the compound's lethal effects. Erik Somers - Callsign: Bishop - is called in to investigate, but his first discovery shocks him to the core. Dawoud Abbasi, the terrorist leader planning to unleash Ergot-B, is his biological father. Bishop, along with an undercover Delta operator known as Callsign: Joker, race across the unforgiving Iranian desert in search of the Ergot-B. Seeking answers, both professional and personal, Bishop must fight against a private army, Iranian Special Forces and men driven mad by Ergot-B. With the life of his biological mother in the balance, and countless more people in cities around the world, Bishop must call on all his strength to not only survive, but also stop the man revealed as his father - even if he has to kill him. The Callsign Books: Callsign: Bishop is part of a series of Chess Team novellas released in 2011. Each of the audiobooks follows a single member of the team and is titled for them: Callsign: Queen, Callsign: Knight, etc. The novellas are co-authored by Jeremy Robinson and five other fantastic authors. The stories take place after the events of Threshold, the third Jack Sigler thriller, but are designed to introduce listeners to the series. If you haven't listened to the novels, no worries. Enjoy the ride! 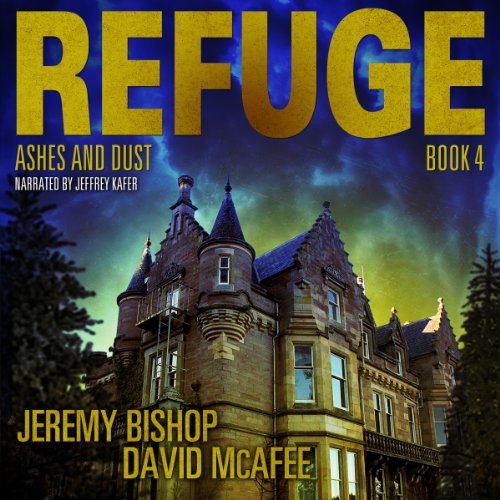 With the latest shift, the inhabitants of Refuge, New Hampshire find themselves in the charred, desolate landscape of a burned out, husk of a world. Using weapons recovered from the National Guard depot, Sheriff Helena Frost begins to organize the survivors into armed units ready to defend the town. But the mystery woman known as Sally Field, cracks under the pressure of constant and strange danger. Out of her mind, she makes a run for the town's border and into the new, dead landscape surrounding them. While Griffin Butler goes in search of Renford Ellison, the elusive multi-millionaire scientist, Frost, along with Pastor Kenneth Dodge, leads a team to recover the woman and bring her back to safety. Beyond the town border, Frost makes a startling discovery - this new world was not always a dry, dusty ruin. Something burned it, and Frost and her group are about to find out what. Can Frost get her people safely back to town, or will the denizens of this blighted world forever add their bodies to the ashes and dust? Refuge is a serialized novel, co-authored by #1 Amazon.com horror author, Jeremy Bishop, and five other authors, including Amazon.com best sellers Kane Gilmour and David McAfee, USA Today bestseller, Robert Swartwood, and newcomer Daniel Boucher.